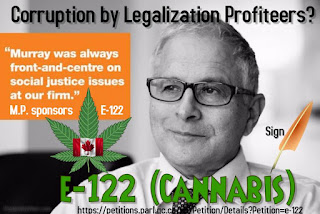 The E-122 Parliament e-petition for calling for a Royal Commission on Cannabis is now live!  https://petitions.parl.gc.ca/en/Petition/Details?Petition=e-122

Thank you Murray Rankin for sponsoring this important petition!


Petition calling for a Royal Commission on Cannabis “Prohibition is a failure of good governance.” ~Senate Report 2002
“Prohibition creates corruption at all levels of government.” ~UN Report 1993
The current cannabis strategy in Canada is rife with misappropriation of funds, corruption, crime and political favouritism. As the country spirals towards impending Cannabis Legalization - this has never been more evident than right now. We need your help to convince the government that this must change. The decades long drug war in Canada is a failed social policy that has cost endless billions. The Senate Report of 2002 identified over $3 billion per year in taxpayer dollars wasted and concluded the Repeal of Prohibition is the only solution

Petition to the House of Commons in Parliament assembled Whereas
We, the undersigned, Citizens or residents of Canada call upon the Government of Canada to establish an independent, fully-empowered Royal Commission into the health, social and economic costs associated with the legalization of Cannabis use including costs associated with prohibition, discrimination, organized crime, political favouritism and corruption. 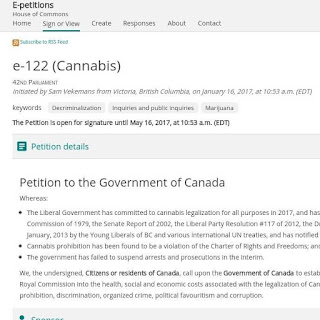 Posted by Unknown at 1:20 PM No comments:

***
An April 2013 UNICEF study found that 28 per cent of Canadian teenagers use cannabis, the highest in the world. This shocking statistic belies the Conservatives' claim that prohibition can keep pot out of the hands of Canadian youth.

A Liberal government will pass smart laws that tax and strictly regulate marijuana, to protect our kids while preventing millions of dollars from going into the pockets of criminal organizations and street gangs.

This isn't wild theory but precisely what happened after Colorado regulated and taxed marijuana: cannabis prosecutions dropped 77 per cent, burglaries and robberies declined and the state has collected an additional $23.6 million in revenue.
Michael McLeod Liberal Party
2015 election
http://www.nnslnewsroom.com/nwtfederalelection/node/132
Posted by Unknown at 7:56 AM No comments:

"
Liberal candidate Larry Bagnell appeared to welcome the question about marijuana, saying his party is the only one willing to go a step further and legalize marijuana sales and use. He flashed the audience a double thumbs-up.

"Eventually the proceeds from crime will no longer go to the Mafia, but they'll go to the government to provide services for youth," Bagnell said.
"
Yukon candidates favour lenience for marijuana offenders
Conservative candidate appears to break with party's position
CBC News Posted: Sep 30, 2015 6:01 PM CT Last Updated: Oct 01, 2015 11:12 AM CT
http://www.cbc.ca/news/canada/north/yukon-candidates-favour-lenience-for-marijuana-offenders-1.3251344
Posted by Unknown at 7:54 AM No comments:

Pam Goldsmith-Jones, Parliamentary Secretary to the Minister of Foreign Affairs & Liberal Member of Parliament for 59042 West Vancouver-Sunshine-Sea to Sky Country (BC)

Pam Goldsmith-Jones, Parliamentary Secretary to the Minister of Foreign Affairs & Liberal Member of Parliament for 59042 West Vancouver-Sunshine-Sea to Sky Country (BC)

***
Hi. It is part of the Liberal party platform as you know. A key aspect of public health and public safety.
Thank you for touching base.

Email ThisBlogThis!Share to TwitterShare to FacebookShare to Pinterest
Labels: BC, legalize restrict and regulate, Liberal

Jenny Kwan, NDP Member of Parliament for 59035 Vancouver East (BC)

Jenny Kwan, NDP Member of Parliament for 59035 Vancouver East (BC)

Letter to the Editor “ It is tragic to hear of the death of Marilyn Holsten and I can believe her life was a "living hell." Her death is tragic because she was a real fighter and displayed incredible strength as she took on the eviction, and the federal medical marijuana program. MLA Jenny Kwan and I visited Marilyn and tried to get the provincial and federal governments to get better home support for her and approval for medical marijuana. Ironically, we just got a copy of the letter from the federal health minister today, saying she had been approved for the medical marijuana program, in late June. It is a telling story of our health-care system that Marilyn had to contend with so many obstacles when she was so debilitated and just needed security and medical support. I'm very sad that her life ended this way. Libby Davies, MP, Vancouver East

http://www.libbydavies.ca/news/articles/letter-editor
Posted by Unknown at 7:48 AM No comments:

Email ThisBlogThis!Share to TwitterShare to FacebookShare to Pinterest
Labels: BC, decriminalize, NDP

Sukh Dhaliwal, Liberal Member of Parliament for 59033 Surrey-Newton (BC)

Sukh Dhaliwal, Liberal Member of Parliament for 59033 Surrey-Newton (BC)

"
When I talk to parents and to the businesses, marijuana grow-ops are a problem that is affecting people across society.
"
Controlled Drugs and Substances Act
Government Orders

Liberal
Sukh Dhaliwal Newton—North Delta, BC
https://openparliament.ca/debates/2008/4/15/sukh-dhaliwal-1/
Posted by Unknown at 7:46 AM No comments:

Email ThisBlogThis!Share to TwitterShare to FacebookShare to Pinterest
Labels: BC, Liberal, prohibition

Joe Peschisolido, Liberal Member of Parliament for 59031 Steveston-Richmond East (BC)

Joe Peschisolido, Liberal Member of Parliament for 59031 Steveston-Richmond East (BC)

"
When asked for his thoughts on Conservative candidate Kenny Chiu’s choice to raise the issue of marijuana law reforms (Chiu being against any) at the opening of his campaign office, Peschisolido responded that he was “surprised that the most important issue for Stephen Harper’s representative here in Steveston-Richmond East is marijuana.”

The Liberals want to decriminalize and regulate the drug “and ensure it doesn’t get into the hands of children,” said Peschisolido.
"
Peschisolido not afraid to use "R" word

- See more at: http://www.richmond-news.com/news/peschisolido-not-afraid-to-use-r-word-1.2058528#sthash.NwbD1cNj.dpuf
Posted by Unknown at 7:44 AM No comments:

Promote Your Page Too

Open Letter to the Parliament of Canada

What level of legalization do you want?